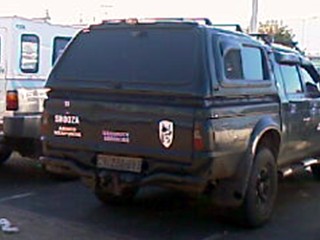 There is a bad guy who lives in our neighbourhood. In the interest of anonymity, let’s call him Chucky. I first saw Chucky about 3 months ago while I was waiting at a red light. My lane was the right turn lane to get onto the highway. This matte black (looks like it was painted with a roller and a can of double velvet) double cab truck with very dark tinted windows came racing down the left lane, cut right in front of the person in the front and went through the red light. He had an armed response sticker on the side of his truck, which at that point could possibly have explain the haste. But once I got onto the highway, I passed the black truck, who had slowed down considerably and seemed to be in no particular hurry.

After some “enquiries” I found out his name and address and that he is a well known drug dealer in our area. The number plates on Chucky’s truck are false and he uses that truck as a place for young girls in the neighbourhood to hide in while they get high, among other things. Armed response stickers – what a great idea for a cover. It allows Chucky to park his car for long periods of time without anyone getting suspicious. At the moment, he deals mostly from the parking lot outside Pick ‘n Pay and from the train station. He often has drug parties at his house and seems to relocate quite a bit but has recently moved back into a house where he previously resided , I believe that it is his mom’s house.

I am sure that Chucky, just like many other bad guys around think that they are invisible, well newsflash Chucky; we are watching you.

Open chat
1
Need Help?
Powered by
👋 Welcome to ACT Personal Safety!
How can I assist you today?